The EQ2 community has the term ‘molo’ for those who solo with a mercenary. In SWTOR we’ve just completed the Hammer Station flashpoint as a duo + companions (so perhaps this is muo’ing?).

I’ve done the first couple of flashpoints in this mode before. But that was my consular and a friend’s smuggler (plus two companions). This group is a much stronger group I feel; consisting of guardian tank + sage healer + 2 companions.

As an aside I still really love the design of Hammer Station. It’s just a great looking flashpoint and very original.

In terms of difficulty for a pair of level 17 characters, I’d say it didn’t feel much harder than the heroic 4 we completed on Coruscant in the Justicar territory. We did wipe pretty early on from a bad pull and momentary panic. After that we found our groove and carried on all the way through the instance with no fatalities. We had some tough moments in the boss fights and on the larger trash groups, but having some crafted med units and appropriate stims helped. 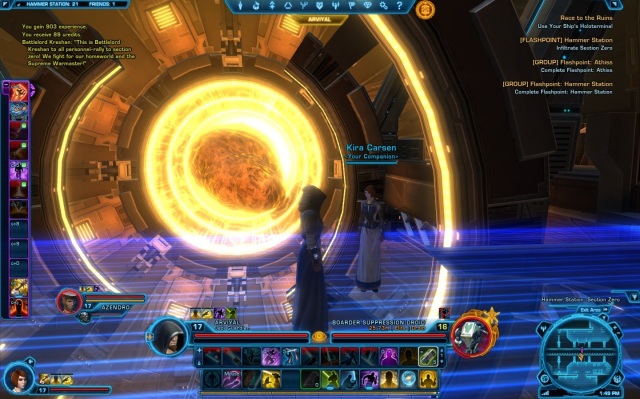 I’m looking forward to later flashpoints as I missed several altogether on my first play through. It remains to be seen whether muo’ing them will be practical but we’ll certainly be up for giving it a go!