A post over at Endgame Viable has me thinking this morning about gearing in MMORPGs. The post is a summary of UltrViolet’s experiences in Battle for Azeroth, but there’s a particular phrase that inspired this post:

[Azerite gear] just seems like such a meaningless Mcguffin in the game. I’d rather have increasingly powerful gear drops, personally. I’m not a huge fan of “leveling my gear.”

This quote made me ask myself an impossible question to answer: namely how popular in World of Warcraft is the gear levelling mechanic they introduced in Legion (and refined slightly for BfA)? Only Blizzard could possibly know this answer and most MMO devs are very close-lipped on anything that telling about a game or game feature’s popularity. It may not even be that easy to quantify as both expansions have gear levelling as a core mechanic that is required for story progression so the vast majority of players will level their gear at least somewhat just by playing. There was no “I refuse to use an artifact weapon” in the Legion expansion if you actually wanted to play the content.

Gear levelling is a staple of the genre these days, it’s nothing new either:  Legendary Items came to Lord of the Rings Online in 2008 with the Mines of Moria expansion. Some MMORPGs launch with such a system, Neverwinter, Tera or the many other Korean MMORPGs (that I’ve not played) all seem to have item levelling in some form or another. So gear progression through a grind could be said to be an expected feature.

Gear levelling is such a thing in Neverwinter (the Cryptic MMO) that it dominates a lot of gameplay, especially if you have a character at end game. I’ve had my progression completely blocked when trying to return because there is a veritable mountain of item level difference between the old questing rewards my characters wear and the necessary item level for newer content (N.B. we haven’t tried the latest campaign, which I’ve heard is better for this). 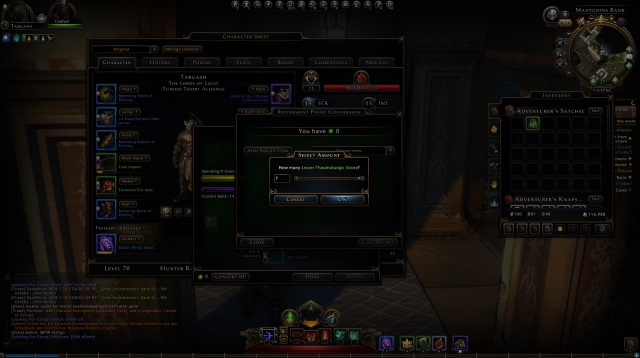 There’s something to be said for having loot drops as the pre-eminent means of progressing character gear level, however. The big problem with gear levelling is that it locks you temporarily (usually for an expansion), or semi-permanently (Blade & Soul?) to specific items, their look and play style. What if you don’t want your character to have that specific weapon for that long? What if you aren’t keen on endlessly rising numbers and would rather have the thrill of a random drop being actually useful? I suppose if you as a player dislike RNG in general (and the genre is certainly soaked in RNG), then gear levelling would be a preferred and dependable method for gear progression. I’m ambivalent at this stage – I do prefer the simplicity of just equipping what drops if its better. That moment of calculation and anticipation of something new to use/wear. The complexities of gear levelling do not add that much to the gameplay in my mind.

I will say that the Azurite gear is probably a better system, for me personally, over the Artifact weapons of Legion. I didn’t particularly like having the same weapon all expansion on every class. Replacing your weapon, or having a choice of weapons is so tied to the feel of combat and your own mental image of your character – having the game dictate that felt wrong. With Azurite gear it’s only an invisible neckpiece that’s fixed, we can swap and change the chest, shoulders and head slots multiple times as different Azurite gear drops. That’s more flexible and customisable.

The biggest problem for me with gear levelling is the negative impact it has on alt-play. I love playing a variety of characters in any MMO. It gives me the chance to try different playstyles and to level various crafting professions. Any gear levelling mechanism imposes grindy and repetitive gameplay on all of those characters (Legion was very bad for this), and it diminishes the value of progressing said crafting skills.

What do you prefer: gear levelling or gear drops?

This entry was posted in LotRO, MMORPG, Neverwinter, World of Warcraft and tagged BlaugustReborn. Bookmark the permalink.