In our last Dungeons & Dragons Online session we played some House Kundarak quests, seems Syp is just ahead of us on doing that. The most memorable quest was Taming the Flames – a nest of nasty re-spawning Fire Elementals.

This is one quest to be sure you prepare for, when you have elementals chain casting fireballs at the party you need some fire resistance buffs. We went with a double dose – protection from fire (from our Cleric) AND fire resistance (from my Artificer). Spreading the buffing duties is important if you want to avoid one character burning half their spell point bar during a run just on buffs. 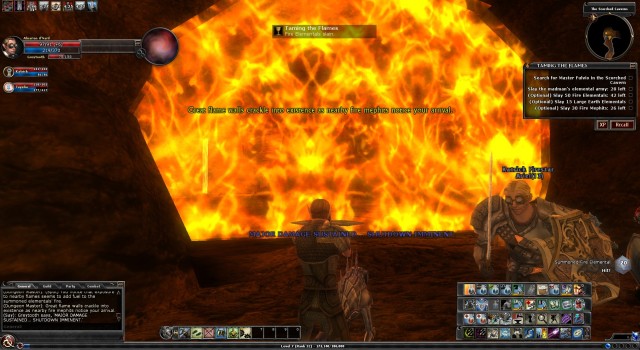 The quest is distinctly non-linear, we were wandering back and forth unlocking different sections and removing barriers. There’s some pretty dramatic graphics, if you like fire that is.

There’s a certain amount of ‘platform’ gaming here too as there are gaps in the walkways to jump and the ever-present possibility that you’ll fall into the copious magma areas that dominate the larger chambers. 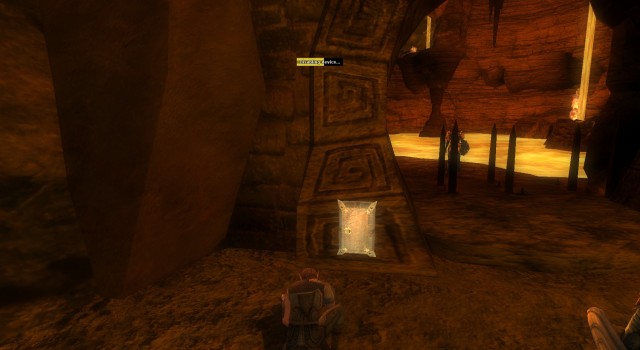 There were also a lot of traps in this dungeon, so my Artificer really got to play the ‘scouting for danger’ role to the hilt. Near the boss fight we found something I’d not seen in the game before, a lone resurrection shrine – normally these are paired with a bluish rest shrine whenever you see them.

As a friend commented, perhaps the developers were teasing about just how dangerous this quest can be by popping a spare res shrine in this corner. I have dim and distant memories of this quest being really nasty back around 2010 or so when I first tried it, I suspect the group I was in wasn’t well prepared or coordinated though. We found it challenging but doable, just as long as we had some magic defences at the ready.