Warcraft’s dark side in smaller details…

Recent expansions of World of Warcraft have dealt with some pretty dark and horror themed content – Legion had all the demonic storylines and Battle for Azeroth has both the events of the war and then the arrival of the tentacle-tastic Old Gods as the big bad. That said this genre isn’t so unusual for the game, it’s perhaps less prominent in earlier eras but there is some very dark content to be found if you delve deep enough.

Fair warning: this post has some minor horror references and images.

Nearing the level cap in WoW Classic has reminded me just how much fantasy horror content was scattered around the game world by the devs of the original game. There are storylines that spring to mind if thinking of darker topics, but here I’m thinking of the background details that many may miss.

Take the smouldering corpses that litter Stratholme for instance. They’re a background detail for sure, most groups moving through this instance will be very much focused on the threats coming from the ambulent undead that stalk the streets. The city was torched by Arthas, if my reading of the chronology is correct, at least *four years* before the events of the Vanilla WoW timeline. So there are corpses still smouldering in the streets after four years.

On a recent Lower Blackrock Spire run a friend noticed the unusual nature of the skin rug stretched out on the floor – it was a centaur! A sentient creatured had been flayed and its skin was laid out as a floor covering. We must have seen these back in our early days in the game but in all these years, I’ve never noticed just what we were running over or near. That’s a whole new level of disturbing. Then we noticed the same art asset in a particular corner of Blackrock Depths as well, just how common are these in Azeroth? 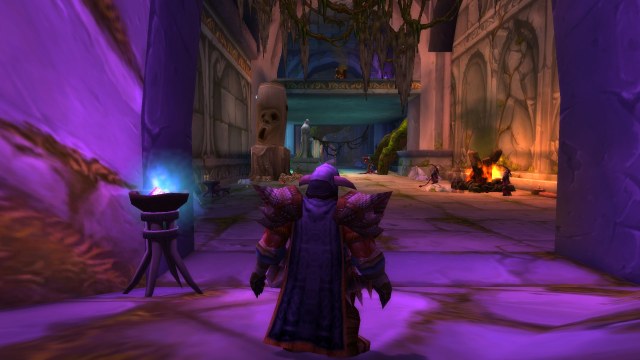 Over in Dire Maul I then noticed in passing that one of the pillars looked like it had a tortured face on it. Trust the ogres to come up with some new dark and twisted means to obtain construction materials; I imagined it’s the poor remains of a treant, but could equally be an elemental that was forced into this shape.

Finally we can look to Scholomance for some ghoulish details that are easily missed. How about the ring of students forever posed as a reading circle near the entrance in this corner. I did wonder at the time if their smallish stature denoted dwarves, gnomes or human children…

Much of World of Warcraft is humourful and light-touch, even if we’re constantly fighting against threats to peace and civilisation. Having played a good amount of Classic I feel like the base game ended on a pretty dour note. The end game zones were unremittingly in dire circumstances: facing endless waves of undead, warlike humanoids, alien insects and demons. Perhaps it’s only in keeping with this mood that the background for our adventures became ever creepier.

This entry was posted in MMORPG. Bookmark the permalink.

1 Response to Warcraft’s dark side in smaller details…