I’ve just spent a weekend at Disneyland California enjoying some immersive escapism for a few days. I’ve been before but this was my first chance to see the new Galaxy’s Edge zone a Star Wars themed set-piece.

There’s only one ride so far open (a second will open in early 2020), though it’s pretty iconic. It’s called Smuggler’s Run and has a team of six players paired up as pilots, gunners and engineers respectively. I’ve not done a theme park ride this gamified/ interactive before so it was doubly enjoyable both as a Star Wars fan and gaming enthusiast.

Pilots had a measure of control on X and Y axis movement shared between them to up the requirement for coordination. The experience was onrails as it is a CGI interactive movie not a 3D simulation after all. I had a go as pilot and found it very immersive. The views out the cockpit windows in front and slightly to the side and above were very effective.  I also tried engineer but that was hitting lit up buttons on a side panel which dragged my attention away from the forward window and view of the action a bit more.

One of the group of six friends (the perfect number for this ride!) is a Disney fanatic and had heard that a test version of the ride had free aiming for gunners but that it was too hard for non-gamers to get a half-decent score. Likely the same would apply to piloting and engineers – the controls in each role are simple and consequences for mistakes not very severe from what I could gather.

That’s a good thing though as this is designed for mixed groups of families, fans and theme park enthusiasts – not crack teams of Tie Fighter series veteran-gamers. I imagine a more complete simulation would have caused no end of arguments between those of differing skill levels. 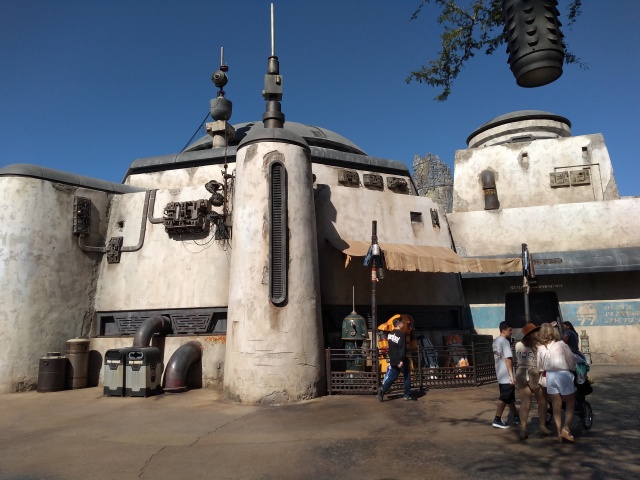 The single ride is set within a largish area of a lovingly designed Star Wars settlement – think Mos Ridley if you’ve never heard of Black Spire Outpost or the planet Batuu. The backgrounds, ambient sounds and dedication of all the cast members (Disney employees) to keep the experience as immersive as possible really impressed me.

It naturally has me hankering for some SWTOR game time once more, gotta love that galaxy far far away!