When Classic is inspiring and when it is not… #WoWClassic

Playing through the original Darkshore this week I’ve been struck by the contrasts from moment to moment about my levels of enjoyment and frustration with this emulated classic version of the game.

There is much to admire in the zone when it comes to looks and atmosphere. Seriously, it’s a hauntingly beautiful forest zone that has something not quite right about it. The forest is deep and shadowy, filled with rather aggressive wild animals and other less natural critters.

The shoreline is beautiful despite the older graphics. Teldrassil looms to the north-west, and playing in the zone as the sun sets over the ocean is magical. I do love a good shoreline in my MMORPGs.

What’s less magical is the actual questing itself. There are some highlights, particularly the sad stories of some of Auberdine’s inhabitants – Night Elf society is beset by troubles, not least the ghosts of elves in the ruins that litter the coastline. The sins of their Highborne ancestors have stayed around to haunt their present. 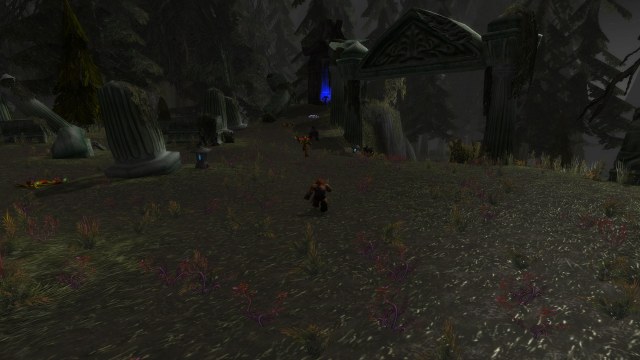 But so many of the quests are super basic kill animals and bring back their bits. The drop rate on these are often pretty low and, unlike in the modern game, not shared pickups. So for all four of us in our leveling static to get those six crab legs, we have to kill a minimum of 24 (because each crab has only one leg!), but in actuality it’s more like 70+ as the drop rate is below 33%… This wasn’t the only quest like this at all, all of the animal culling quests are the same. I’d dare anyone to suggest that this is better content design compared to modern World of Warcraft, especially when it comes to encouraging (or discouraging) people from playing with their friends outside of dungeons.

There is real challenge to be found in the open world content. It is very easy to get in over your head among rapidly re-spawning monsters if you’re not in a group. Even when in a group there have been several desperate races to save someone who got separated by even a small distance and who suddenly found themselves being mobbed by four or five creatures at once.

So the Classic experience after one week of casual play is one of two halves: on the one hand it is good to feel that group challenge again in normal questing areas. On the other hand the content is rather outdated and group-unfriendly that punishes as much as it pleases.