I’m back in Star Wars the Old Republic at the moment and back into running some dailies on my Jedi Shadow tank. I did pop to see Dantooine for the first time, though there’s no pirate event running to take me there and flying there myself uninvited left me with only a couple of daily quests to complete.

They’re cute enough, as Shintar noted a while back it’s unusual to have a mostly peaceful zone like this. Back on Ossus where there’s more to do, I settled back into doing dailies. I’m not playing long enough at a time to do all ten dailies needed for the daily bonus meta-mission, but I can do the five daily meta-mission easily. So over a couple of sessions I get the ten as well.

Not all the dailies are created equal in terms of time investment. I seem to have a lot of poor luck with the “use serum on Genosians” mission. I can try several groups and get none of the eight ‘successes’ needed. The effect of the serum is random, of course, so I might be just being unlucky – not a mission style I’m enamored with. Likewise I find the “freeing Jedi from cages” an annoying mission to complete as you have to break stealth to open the cage and, invariably, a large group of guards will pull. I could sleaze it with my emergency stealth button but, waiting to do that four times just isn’t satisfying or time-efficient when I have limited time to play. 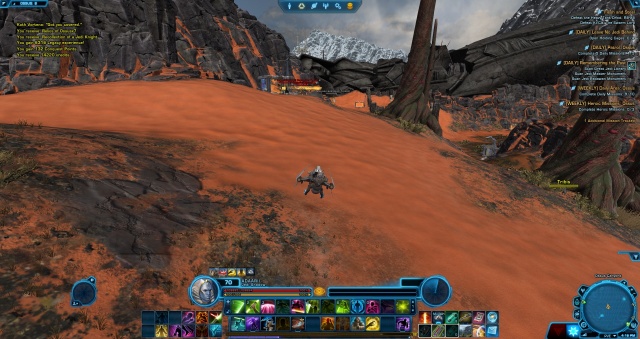 Other missions that I do mostly do are the various missions in the Canyon: killing two named Genosians, planting beacons and blasting nests closed. That’s a particularly neatly packed set of missions in a smallish area. I often end up doing the macronbinocular mission even though it requires a bit of flying around; I just like it as a non-combat objective.

Do you have favourite Ossus dailies?