A very interesting issue I came across, rather at random, is that of the downsides of ‘AFK’ gaming. I’ve been messing around in Black Desert Online again so this struck me as particularly applicable. It raises some of the potential negative impacts of afk gaming,  beyond the usual complaints the phrase might conjure in MMORPG players’ minds about leeching or botting. 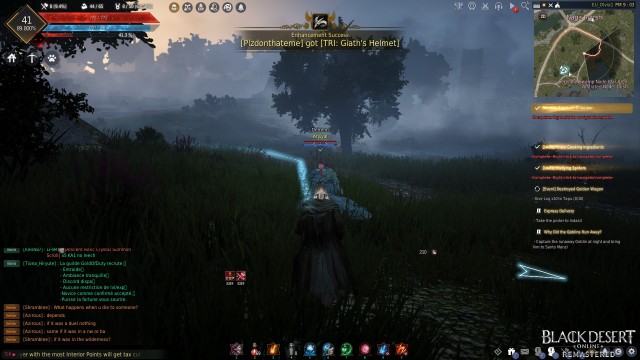 The Reddit thread that inspired this post criticised the design of Black Desert Online’s systems that encourage ‘away from keyboard’ gaming – it is possible for your character to perform repetitive actions in an automated fashion without much intervention from the player. You can set your character riding in circles on a horse to level the mount for example, or leave your character afk fishing to gather crafting materials.

According to the comments on this thread such activities are popular, and the in-built ‘run minimised’ game mode further encourages them. Other commenters will leave BDO running minimised in the background while playing other games in the foreground. If nothing else this is likely to increase the computers electricity usage – the processor, graphics card and hard drive working harder will generate more heat and require more cooling fan action. Using more electricity according to some energy industry professionals is a bad idea in general, unless you can guarantee your supply is from renewable sources, then any usage is contributing to potential climate change effects. This argument could easily devolve into tangential discussions, but I would say running the computer almost 24/7 for one game *is* not going to be good for the environment.

The PC wear and tear argument

I tried the minimised game mode early on when I first played but I remember being worried about what effect that would have on my computer and haven’t done it much since. I rarely run two MMORPGs at a time even if my PC is capable of handling the load – it’s likely to punish the hard drive, graphics card and cooling systems for the PC to be that active. It usually results in some loss in gaming performance in both games also.

Computer components all have a finite life, for some such as hard drives this is even estimated as part of the units specifications (mean time before failure MTBF). Everything we do on a computer will add to the cumulative wear and tear effects that will cause parts to fail at some point. Now a computer isn’t much use if it’s left off for fear of ‘wearing it out’, but I’ve never been a proponent of leaving a computer on all the time for convenience. If I’m not using it for more than ten minutes or so then I shut it down. So it would sit very badly with me to leave my computer on overnight as some commenters advocate.

The plainest argument is that of cost. Electricity in most countries is priced by usage, the more you use the more you pay. Electricity in my country has become increasingly expense in recent years, a trend that’s not likely to reverse. I’m not in a position (thankfully) of having to worry about the cost overly, but neither am I so blasé about it that I’d waste money burning electricity for no reason. So again leaving a PC on all the time to afk train a horse is a big waste of electricity to me. If you lack an unlimited Internet connection then this also would impact this – wasting limited bandwidth on afk gaming (no matter how small the bandwidth use) again isn’t something I’d want to do.

AFK gaming and other games

This post could be seen as a critique of Black Desert Online, which it isn’t per se. When I have played I’ve enjoyed it without engaging in any afk gaming at all – it’s part of the game but not an essential part to me. Other games may not have the baked in systems to encourage such activities but they may be designed with the same “keep them logged in as long as possible” mentality.

What about repeatable quests on a short-ish cooldown timer (Lord of the Rings Online), public activities that encourage you to follow the zerg for regular or timed events (Guild Wars 2) or repeatable instance grinds for tokens or random rewards. The mmorpg genre is full of examples of gaming that encourages us to be online longer than we would necessarily chose to be. If you’re leaving your game logged on while you wait for a rare spawn in World of Warcraft, or semi-afk mining ore in LOTRO while watching Netflix then some of these same arguments could apply…

This entry was posted in BDO, Guild Wars, LotRO, MMORPG. Bookmark the permalink.