I was thinking about down-time in dungeons within MMORPGs recently, or the lack thereof. It’s just not a thing any more in most games that your character needs any rest after fights, even after a boss. At the start of Battle for Azeroth on my Shaman or Priest I was finding that mana was a bit of an issue after any large group of trash mobs, boss fights were likely to use most of my mana if I didn’t risk running out. Very quickly into the expansion, however, gear upgrades negated all that again, we are back to the new-normal that mana isn’t really an issue.

Although I have no interest in mythic+ dungeon running, it appears that it is popular enough if guild chat is anything to go by. The speed-running element of these means that any attempts to re-introduce a more varied or measured pacing to dungeons would fail. The playerbase is long-since used to speed-running and are even encouraged to do so for greater rewards these days.

We as a group of friends can chose to run slower, and since we don’t bother with mythic plus there’s no timer to rush us ever on. Still it’s hard to resist the almost baked-in norm of speeding through. I miss the downtime not just for a bit of a break between pulls. It was also breathing space for some in-situ roleplaying, or just chatting and joking.

I didn’t really experience the older MMO style (e.g. Everquest 1) where such breaks were part of gameplay. The idea of ‘camping’ an area to grind mobs doesn’t really appeal on an intellectual level as it sounds like it’d quickly get dull. Yet I do imagine that the camaraderie and RP potential for such gameplay might make a welcome change.

It’s why I lamented the loss of the campfire mechanic in Tera the last time I returned there. That was a perfect downtime system – good shared area buffs from the various charms that you could throw on the fire and an in-built max health buff just from sitting for a minute or two. Not long enough to get bored, but long enough (IMHO) to allow space for chatting or RP in a game that – by its design – is more frantic and full-on than most.

I can remember vaguely how much more downtime there was in World of Warcraft when we started. Eating after almost every fight on my baby Warrior wasn’t that much fun when he tried to quest solo. Wand auto-attacking because my Mage had run out of mana mid fight didn’t feel that great either (though weirdly I miss wands as ranged weapons now). There can be more of a balance in MMORPG game design. Do we really need to be constantly gogogo’ing all the time? Is it any wonder we blow through new content so fast? Shouldn’t we heed the Pandarens and “slow down” a bit? 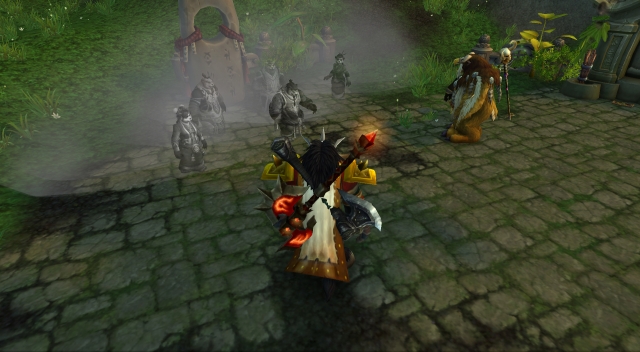 This entry was posted in MMORPG, Tera, World of Warcraft. Bookmark the permalink.

6 Responses to Downtime in MMOs