So we’re on day 3 of the expansion as I write this, we actually got into the expansion Monday evening (late) and did the intro and first run around Boralus. 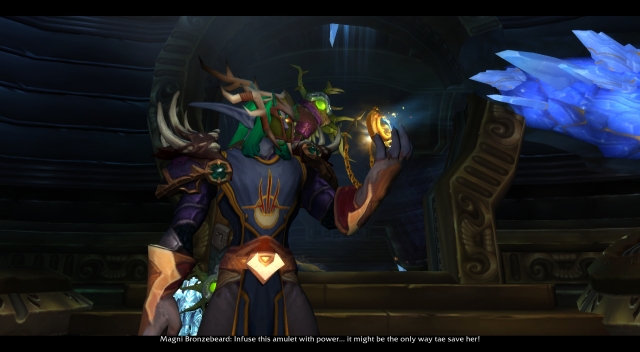 Rude Azeroth, RUDE! I am perfectly capable of holding amulets in Boomkin form!

After waiting with the masses in Silithus, we had a brief chat with Magni before rushing off to Kul Tiras. The visuals are pretty stunning from the get go, though I’m glad we played through yesterday on a second pair of characters – there were bugs on the first evening that meant key videos and in-game NPC dialogue were skipped. If you haven’t played through on a second character yet, you might want to get on that. 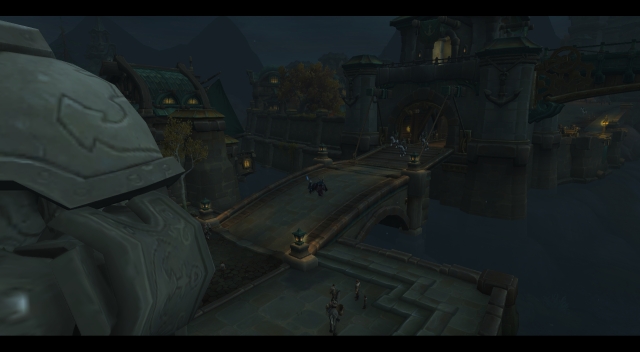 The zones are large this expansion, there’s only three but they’re packed with content. So far we’ve done maybe a third of Tiragarde on one pair, and in yesterdays longer session on alts with a friend we did almost half of Drustvar. I hadn’t realised how bored I was of fel-fire infused visuals until we reached the wild beauty of Kul Tiras’ zones. Minor spoilers below, so I’ve inserted a more tag – if you’ve not played Kul Tiras at all yet, maybe bookmark this to read later.

Tiragarde is about the politics of the factions on the island, plus some whimsy with pirates. It’s enjoyable, even if I rolled my eyes hard when Blizzard obsession with poop-jokes showed up. Some of the drop rates on quests are pretty poor, almost Burning Crusade levels of random – this and other issues highlights that there’s a lot of inconsistency of quest objective credit when playing in group with others. Sometimes clicking an objective counts for all, other times you all have to click the same thing, or you have to find separate things to click because they despawn when clicked: three different models for the same action when in a group. It’s actually nothing new, we had the same issues with my recent efforts in Argus to get my allied race reputations ticked off. 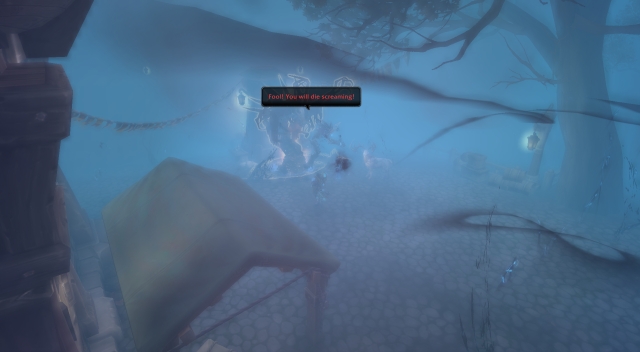 Our trio of characters are playing through Drustvar. I really like this zone; it has a spooky, haunted vibe and lots of very interesting NPC characters. Blizzard does have some really nice storytelling going on in this expansion, and the zone design is sumptuous. There seems to be some nice little extras to work on in the background, like the scrolls collection. 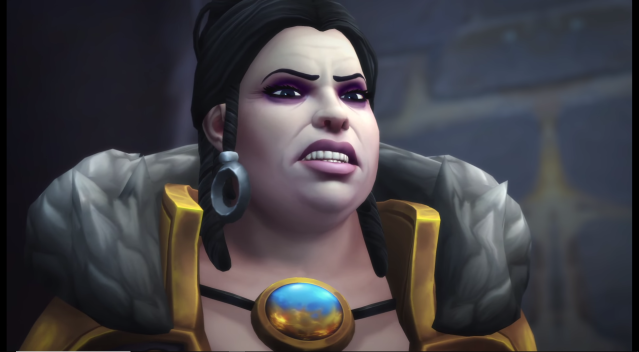 I wouldn’t say I’m as gripped by the main story as I was for Legion – to me at least there’s less sense of drama and impetuous behind our actions. Also the early cut scenes are very ‘Disney’, and the musical and visual notes in Drustvar make me think we’re queuing for the Haunted Mansion ride. Perhaps the worst aspect for me was the double-whammy of the ‘start in prison’ opening for Alliance characters (so very over-done in fantasy RPGs) and the obvious ‘advisor is evil’ trope with Priscilla Ashvane. So many visual clues here in one cut-scene – her facial expressions throughout scream “I’m evil, I will betray you” everytime she looks at Katherine Proudmore, her look (sneering facial expressions, eye make-up, her resemblance to Ursula) also immediately made us think ‘evil’.

That said there are plenty of positives to the content so far, and we’ve not even touched the third zone. It seems like professions might be more viable and desirable this expansion, which if it turns out to be true will be very welcome. We’re certainly being distracted often enough by gathering nodes.

This entry was posted in MMORPG, World of Warcraft and tagged BlaugustReborn. Bookmark the permalink.