What if WoW had…

Although I wasn’t playing gaming over the weekend we did discuss it amongst family as several family members still play World of Warcraft actively. During these discussions certain points came up that, for me, represent baffling gaps in this game’s content offering – features you find almost as standard in the modern MMORPG genre.

The obvious missing area is character housing. The garrison was an abortive and very limited attempt at a customisable ‘home base’ for our characters, but in reality it was far too rigid in how you laid the buildings. The very strong links between the garrison and the main campaign of the expansion also hampered it greatly as a means for creativity – having to do the same quest chains on every character to unlock the garrison’s potential got very repetitive.

Legion bought class halls as a replacement to the garrisons without any meaningful customisation, and later the Vindicaar spaceship (dimension ship?) that had none at all. So we’ve made negative progress on this front since Warlords (it’s not often I can say Warlords did something better than Legion!)…

As I’ve discussed in the past, I’d want housing to be part of a crafting renaissance in WoW – not just a gold sink. The game could sorely do with a new profession, it’s been a long, long time since they added inscription. Woodworking or something similar could add a chance to make furniture, and the odd natural weapon or shield, to players who want to spend their time more productively.

Playing other games so regularly, I’m left wishing World of Warcraft implemented a more finely tuned mentoring or level-scaling system. Level-scaling zones have been introduced as a relatively new feature to give you more time in zones to finish the quests or other content before things ‘go grey’. However that doesn’t solve the biggest problem with character level-based MMORPGs – if you want to play with a friend on a character with widely differing levels then either the experience gain of the lower-level one will be reduced, the lower level character will find themselves unable to contribute meaningfully, or some combination of the two. I’ve never been a fan of “speed run” style gameplay:  where you follow a high level character through a dungeon or other content hoovering up the drops while the lead character slays everything because they’re so over-powered.

I’d much rather be able to sync my level to that of my friend(s) so we can all contribute and help one another – this allows me to jump in without worrying that a) I’ll spoil their fun and b) I’ll outlevel content on that character myself by doing something other than his or her current zone.

So many games offer this in some flavour: there are those that auto-sync your character to the zone or instance as appropriate (Elder Scrolls Online, Star Wars the Old Republic, Neverwinter) and others that give you some measure of control over the sync, mentoring-style (Everquest 2, Rift). Neither set of examples is exhaustive, being able to “just play together” is no big thing in 2018, yet WoW still hasn’t introduced this. Auto-sync’ing characters to a zones level range isn’t new, but expanding the zones level range massively yet not capping the characters level is.  The current WoW system is markedly inferior to any of the above example game’s syncing systems in terms of the “just play together” issue.

The transmogrification gear appearance system is wildly popular from my limitied experience of other players outside my immediate circle. Farming old content to get certain looks for your character is a legitimate pastime in WoW. But, like level-sync above, the system developed by Blizzard is more restrictive and convoluted than several analogous systems that were introduced in other MMORPGs before or since. 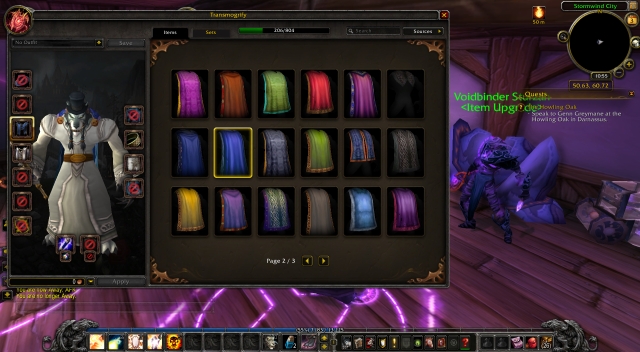 Rift and Lord of the Rings Online are my two go-to games for how I want games to implement this – just give me one or more additional sets of ‘cosmetic’ gear slots that are ‘appearance-only’ so I can quickly create a new look – that should override any slot that is filled out and should not require any further attention until I chose to override it with another look. I should be able to change this anywhere (out of combat I guess?), and not require visiting a NPC (WoW), nor a costly material payment (Guild Wars 2 or Final Fantasy 14!).

Customising a character’s look is a fundamental part of MMORPG gameplay for many, many players – don’t try to monetise or limit it developers!

The last thing I’d like World of Warcraft to see is some kind of alternate advancement system. Everything character development-related in World of Warcraft these days is so combat and vertical-progression oriented. It would be wonderful if the devs could introduce new ways to tweak or customise our characters that weren’t just adding ‘more powah!’. Here I’m talking offering more choices of abilities or things to work on that aren’t combat-oriented (e.g. lifeskills).

Examples that come to mind are the Planar Attunement system from Rift, this offers a mix of very minor stat boosts (mostly elemental-specific resistances or boosts to certain weapons), but more importantly interesting utility powers that you gradually unlock – I especially like the teleports to the various original zones. 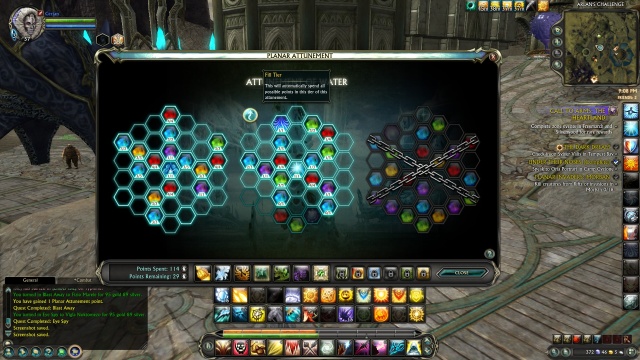 Everquest 2 has a crazy-complex alternate advancement system that allows you to shift the theme of your character class somewhat – it’s part talent tree and part class-feature unlock. A popular Inquisitor build uses this to shift most combat spells from ranged into melee variants to make you a ‘battle cleric’.

I suppose there’s a danger that alternate advancement systems can become focused on ‘mandatory builds’ – the community trying to impose optimised builds on players of a given class. That’s no different from the same issue with talent trees as a primary character customisation system, however. I prefer AA options that give non-combat utility or thematic options. I think they do give you something else to work towards that’s not just the gear grind once your character hits the level cap.

I have the impression that Blizzard, in WoW’s early years, were well-known for taking ideas and adding polish. They wouldn’t be the first to do this feature or that system, but when they did it would be slick and genre-best (or close). They took a lot of already genre-standard tropes and made this leviathan MMO by doing the same things better. These days, something feels different, like their game system devs are not focused on doing things better than the competition, but rather doing things differently regardless of the  cost to usability…

6 Responses to What if WoW had…