[From our World of Warcraft correspondent – Meznir]

Yes, it’s finally here. Years after other MMOs had it (MMO Bro has a summary of “Five of the Best MMORPG Level Scaling Systems“) World of Warcraft has finally added in level scaling throughout the whole game with last week’s patch 7.3.5.

Blizzard trialled the feature in Legion by letting players choose which of the four starting areas to play in by scaling quests and mobs to the player’s character level (between levels 100-110); but now zones throughout Azeroth and beyond all scale to the character’s level (within bands – see below).

Which way shall we go Khadgar?

This is an important distinction – unlike most other games that scale your character up or down (thus “capping” your level in certain zones) – a player’s character never changes, just the world around it… to a point. Like many features Blizz have “borrowed” from other games, they have looked at what other games have come up with, thought about their player base and changed things up a bit to suit their audience. 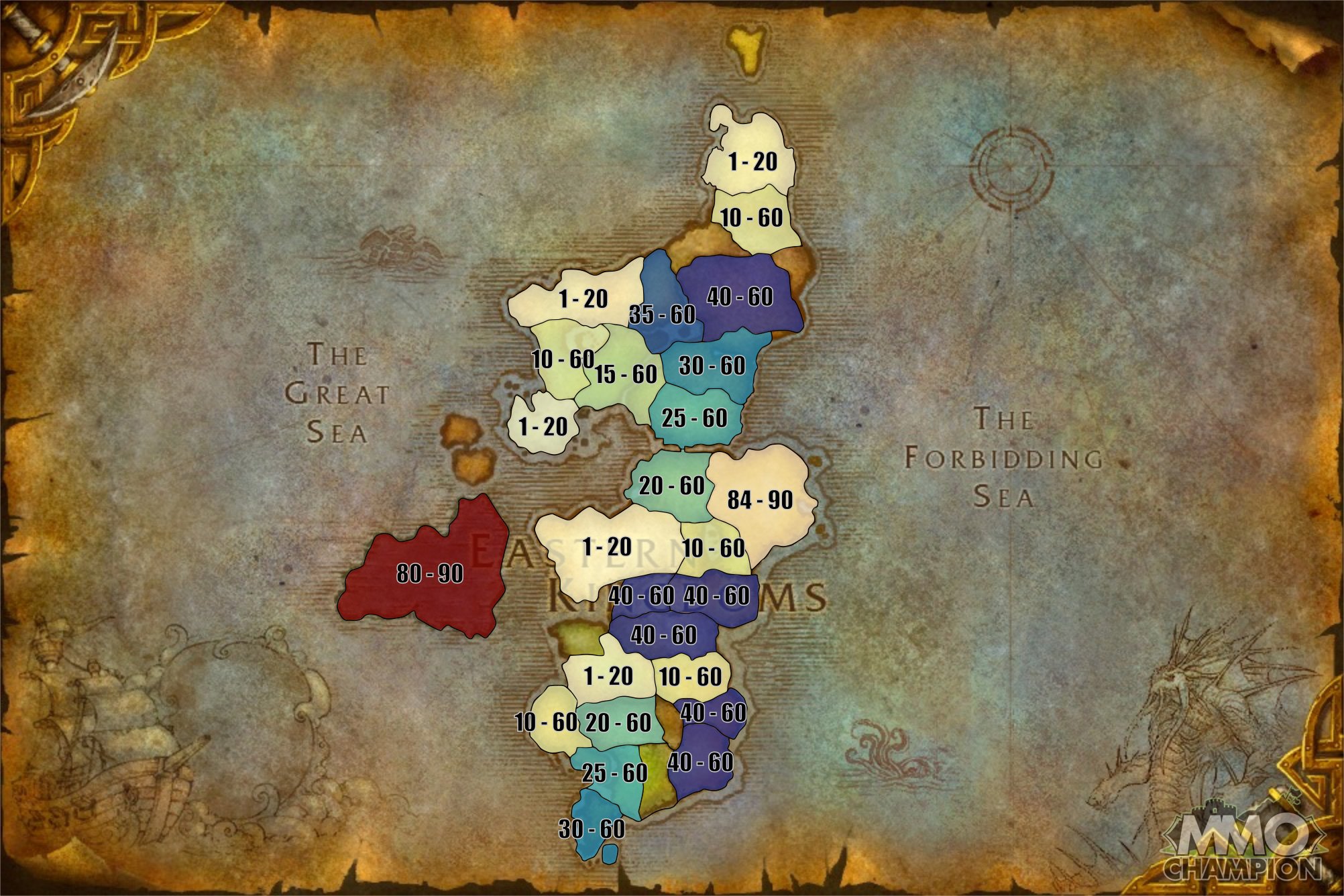 MMO Champion have some great diagrams showing level ranges for each zone.

So moans of “but I want to one shot hogger when I go back to Elwynn Forest” have been heard, alongside “I keep outleveling a zone before I finish the quests”. Now, if you quest in a zone, the mobs and quests will stay in step with you up until a cap (e.g. level 60 for most old world content). Past that point, you will keep levelling, but the content won’t. So a level 110 can come back and sneeze on Hogger to kill him, as the player will still be 110 and Hogger will be the max for his zone – 20. Unlike games like GW2, the player won’t be scaled down to the zone cap.

No one-shotting low level mobs in low zones for these two in GW2 as they will be scaled down.

The other big change with all this is the bracketing of old expansion levels. Burning Crusade and Wrath now BOTH scale between 58 and 80. Cataclysm and Mists BOTH scale between 80 and 90. Meaning that you can A) choose between them and B) stay in places like Netherstorm for long enough to get the “Into The Nether” Loremaster achievement!

That’s all the theory done – what’s it like in practice? Short answer: Quite surprising!

A month or two ago, I’d parked my Gnome Warlock when he hit level 70. He’s been working on getting the Blade’s Edge Loremaster and had everything done apart from the quests for Ogri’la – which didn’t open up until level 70. But at level 70 it used to be the case that your XP was nerfed for Burning Crusade content, to “encourage” you to move on to Wrath.

But now Blade’s Edge scales all the way up to 80 and Ogri’la quests have been lowered to level 65. So I took my Warlock off to see the Ogres. The effects:

Those Ogri’la ogres love me now!

There are still some things to iron out. Changing the Loremaster achievements from “Do a hundred-odd quests” to “Complete these chapters” aren’t as clear in the older content as they are in content designed for it. I did all the Blade’s Edge quests up to the quest that wowhead thought I needed to – but didn’t get the achievement until I finished off two side quests. Similarly my main that had done most of Netherstorm, only has one chapter ticked off – so I have to find what quests I haven’t done (thank you Quest Completist for your help this week!) or wait until I level a new character through it all.

And that’s what I’m most excited about with this feature. I’m thinking I’m going to park that warlock gnome again (I have SO many gnomes) and level a Void Elf warlock when it comes out instead. I have about 4 Loremaster achievements dotted about that I need to finish off and with this system I can, without feeling that I’m wasting xp hanging around in areas that have grey mobs and grey quests! Whether the slowed down levelling makes it feel like too mush of a slog will remain to be seen – but I’m optimistic that the gameplay will feel more fun now that I’m not one-shotting everything.

I’ll report black further on this when I’ve played through old world content on that Void Elf. Let’s hope that the Allied Races are released soon…

This entry was posted in MMORPG, World of Warcraft and tagged MMORPG. Bookmark the permalink.