Playing my Esper in Wildstar has given me pause for thought on what the game, and other MMORPGs in general, could do to make it an easier process to take on a newly dinged max level (or near) character. If you as a player have already capped a character the hard way then such advice is probably not going to teach you much, but even then the new character may differ enough in play style to require adjustments. 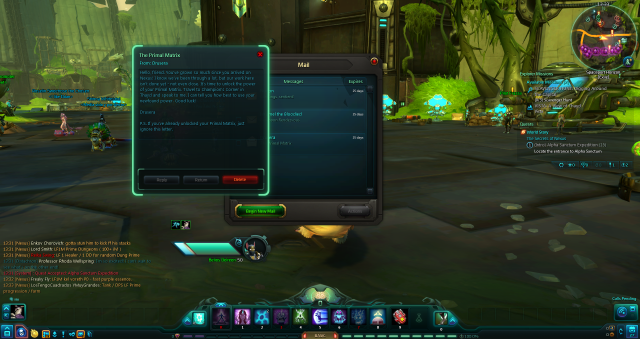 In my case in Wildstar playing the Esper has confronted me with a couple of hurdles, firstly what on Earth (or Nexus) to do first? The game bombards a dinged character with calls and messages from quest givers and other NPCs. The majority are actually old stuff from leveling zones that your character just bypassed – I guess some players would resent missing anything like that but it’d nice to have such quest pointers as optional access items rather than a bombard of noisy calls coming in one after another.

I’ve been out of game for a while so other than Arcterra that I have seen, I wasn’t sure what else had come since and what would be best for this ready-geared and configured character. I knew enough to spend his action points (a.k.a. talents) and AMP points to enhance certain abilities. As for runing his lovely purple gear, he started with a solitary gold coin so buying runes of the auction house wasn’t going to happen for some time.

I fancied trying something new but going to Crimson Badlands soon taught me that not all end-game daily zones (like Arcterra) are the same. My Esper nearly died to the first trio of mobs, despite them not being elite or anything special. Here I think the game needs to be more directive in what the new level 50 is equipped for, there’s a lot to do at level 50 but it seems not everything is equal. By contrast, he held his own very well in a round of dailies in Arcterra killing elites solo and surviving very well in the 20-person boss fights. That, especially, pleased me greatly – in trying to decide what I wanted to ding to 50, my main criteria was a class that would be good for this kind of public group content. I found in both bosses it much easier to stay alive and to help others to do so as an Esper, despite the tanky-nature of Engineer I found it much harder to survive boss fights on that class because I didn’t have self healing. 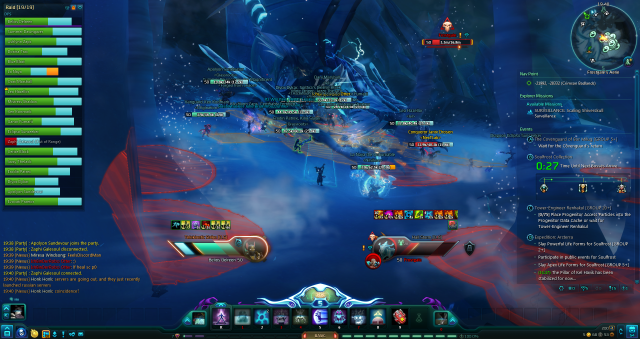 I’ve faced this lack of content guidance in other MMORPGs for insta-dinged characters, for example in Everquest 2. It’s all very well bombarding a player with everything they could do, but perhaps the games should put a bit more effort into suggesting what they might be best starting with as something realistic for that new character, in whatever non-optimal state it is presented. The devs would be fooling themselves if they think their version of the prepared character is anything like as optimal as one that a veteran player has leveled and crafted, so players shouldn’t expect to be able to dive into the harder content, but likewise some indication of what is going to be harder or easier when levels cease to matter would be welcome. MMOs may well present this information but it’s probably couched in jargon – for example in footnotes that note a special stat requirement (e.g. 550 Heroism needed for level 1 prime expeditions in Wildstar).

Although I’ve not yet given it a go, WoW introduced the concept of class trial for level 100 characters. This allows you to play a specific class and spec for a set time in a special zone, with a guided tutorial to key abilities. It’s a nice concept for giving newer players an intro to how a high level class would play.

I suppose it’d be easy for this kind of guidance to be too directive or annoying to veteran players. Being told what to do is a real turn off for some players. But I play with family members regularly enough who lack the MMORPG exposure that I’ve had over the last nine-odd years. A max level character can be tempting, especially for someone who is new to a game and is stuck seeing friends or guildmates having ‘all the fun’ at level cap while you slog through the levels (we had just that experience in WoW back in 2007). But it must be very bewildering to the non-veteran to be suddenly bombarded with so much content and new systems when presented with that new character.

This entry was posted in EQ2, MMORPG, Wildstar, World of Warcraft. Bookmark the permalink.