So the new ‘event server’ is now available in Everquest 2: Race to Trakanon. Normally I wouldn’t be that interested to jump on the bandwagon, the time-locked “maximum nostalgia” servers haven’t grabbed my attention. This time, however, Daybreak have dangled the carrot of a rather achievable account-level reward for taking part: get a character to level 10 and you get a rainbow-feathered pegasus unlocked for all characters. 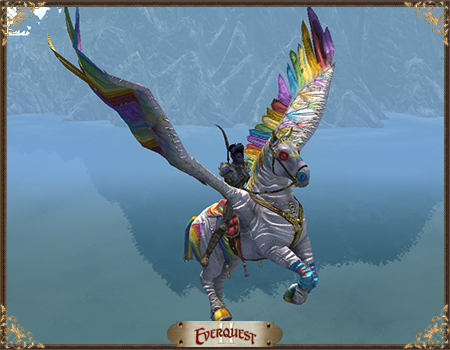 Thanks to a previous collector’s edition, for Age of Malice, I already have the rather noisy Pterodon flying mount on any eligible characters. That’s a good mount that gives some lovely stats in addition to its flight ability.

But I’m a bit of a sucker for pegasi, they’re just lovely looking mounts. So I’ve recreated my original EQ2 character, an Inquisitor, this time as a Templar on this event server. Even given my limited gaming time at the moment I’m pretty sure I can get level 10 before the deadline for the reward on the 26th July.

I’m not used how the game used to be, difficulty-wise, as I started with the EQ2X experiment with free-to-play (5 or so years after launch). This event server comes with a bunch of restrictions compared to the live game; notably reduced experience gain, none of the usual bonuses to XP (e.g. the 20%+ bonus from having a level capped character) and tougher monsters. So far it seems fine, I’m killing stuff on the Isle of Refuge without feeling fights are too much of a slog. I may have to quickly create a new level 1 on the Skyfire server to see how the live experience differs as it’s been so long since I started a new character I can’t judge if there’s much difference.

The Isle of Refuge starter experience is a new thing to me – it’s the classic starter zone that the devs removed in favour of the various racial starter zones that are available on live. I have none of the nostalgia associations with the Isle that longer-term players may feel; personally I prefer the variety of having six different potential starter zones over all characters being funneled through the one.

This entry was posted in EQ2, MMORPG. Bookmark the permalink.

4 Responses to EQ2: Race to Trakanon