So by now I’ve played a half-dozen good sessions in Trion’s Minecraft-style MMORPG, Trove. I’ve unlocked three classes so far on my character: Shadowhunter (starter choice), Chloromancer (free unlock from Rift MMO) and Candy Barbarian (which I bought with the in-game cubit currency). 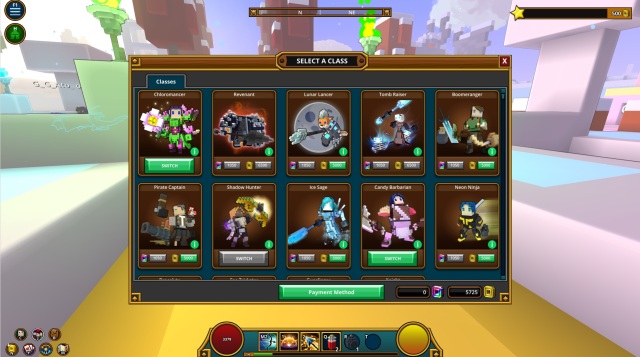 We’ve progressed through the tutorial quest/task series to the end; I have built a basic ‘cornerstone’ house and we’ve collectively built a club house for shared resources and crafting stations. At the moment I’m still experimenting with class builds and looking for shadow-level gear (shadow is the new purple). My highest class is level 14 out of 20 so there’s still some progression to do.

Gearing seems pretty dominant in how the classes play, there is no real character customisation beyond the gear you choose to equip and any crafted upgrades you apply to said gear. The character classes seem pretty varied and fun to play although, as stated, there’s no variation between my barbarian and anyone else’s other than gear choice. We’re playing in Über-2 level zones now, with a weekly jaunt to the Shadow Tower to try and get some higher-quality dungeon loot. The first level of difficulty was no real problem, but our characters were defeated in seconds by the early encounters in level two of the Tower – clearly we’ve some more levelling and gearing to do before we progress any further. 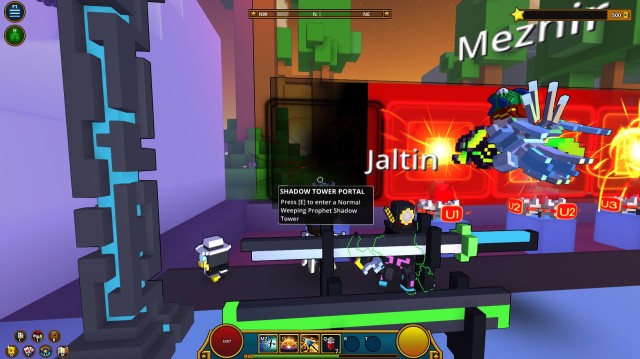 Most of the content is out in the adventure zones, randomised maps segmented by zone types like “Fey Forest” or “Dragonfire Peaks”. Play mainly consists of exploring each map to look for dungeons to clear, resources to gather and random monsters to fight. Once you’ve passed level 10 on a class you are given a task on the hour, every hour, to clear dungeons in a specific type of zone. Two random classes get a completion boost for this – each dungeon cleared counting as three. You have twenty minutes to clear five for a winter-themed bonus reward. It seems that these hourly tasks represent a kind of seasonal event or festival – in the collections section of the character you can see your progression towards event item unlocks based on randomly finding ‘soul’ items in the bonus reward. This is very RNG-heavy. We noticed a very wide gap between the numbers of souls we’d unlocked – at one point I had three and my husband had 12 already.

The game overall is fun to play with friends, there’s no actual formal grouping but you can meetup with players on your friend list at the click of a button and rewards for clearing dungeon bosses or monsters are shared with any nearby characters. This is a simple but effective way of avoiding kill-stealing. It’s a good thing the game was designed this way as there are certainly plenty of zerging, hyper-competitive players in the game, racing to get to dungeons in the right zone for the hourly task seems to be the norm. Often you get credit for clearing a dungeon just as you arrive or as you are killing monsters in the early rooms because other players have skipped all the trash mobs to dive through a portal to the boss fight.

Despite the fun to be had in groups I can’t say I’d be motivated to play Trove solo or for longer than a quick playsession of an evening. The lack of abilities, only four per character, and the slightly frantic nature of the more difficult content have me reaching for one of my staple MMORPGs for a more relaxed gaming experience. Next up is to unlock more classes, we’re gaining cubits at a good enough pace by just playing the game.