The latest session of our Imperial trio involved us closing in on the end of the Dromund Kaas mission arc and some heroic ‘fun’. I’ve said before that I love the group content in SWTOR and overall heroic 4’s are good for us to do in a trio + Mako. 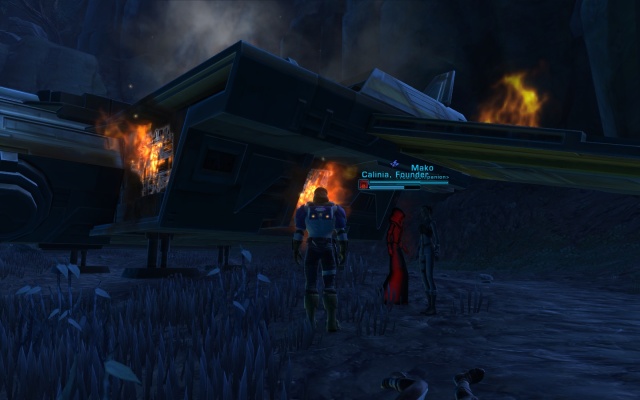 However the last two sessions of SWTOR that I’ve played (Imp and Jedi duo) we’ve been unlucky enough to have an item collection mission bug out on us. This time around it was the heroic 4 mission, Friends of Old, that went wrong. Tank and I completed collecting the three thingummies with a 100% drop rate from the designated target creature type. Our Sith sorceror healer was inexplicably missing one. We went on to slay another 4 or 5 of them (with the attendant groups of gold elites of course), still no drop. So we had to reset the mission for that character and redo another three groups.

Other than that, it was a good session overall. I have a new meta game to play – on any creature that doesn’t die super fast to our collective power (gold or gold-silver), I try to time a Rail Shot to finish it with style.

Playing a pyrotech (dps powertech bounty hunter), I’m left wishing my Jedi guardian had as many potential area threat abilities. What I do lack is any kind of decent crowd control or way to drop threat if I accidentally grab aggro.

Without including specific spoilers, I am loving playing this particular group mix. As a sarcastic bounty hunter I get to be irreverent about the Sith Lords’ domination of the Empire and to drop some nice one-liners. My delight over NPCs recognising that we’re doing missions as a group hasn’t worn off either; it’s not limited to the odd “you all” either, NPCs do have nicely scripted reactions to this.