Playing EQ2 as a newcomer can be a tough learning curve. From what I’ve read on forums and blogs the game has changed over the years, and gear has been regraded wholesale so I’m sure difficulty today is not as high as it used to be. However there are still a lot of linked groups of creatures. Take innocent little goblins for instance. 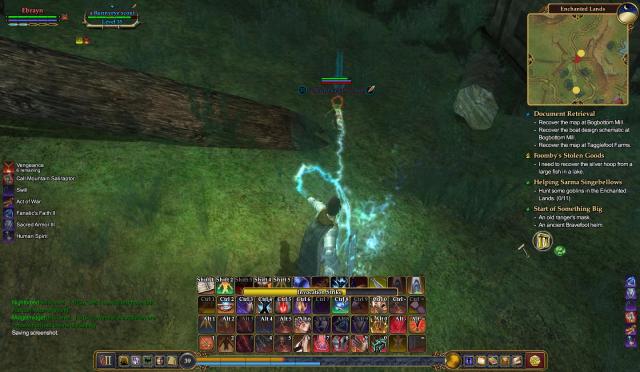 It’s only a goblin

While pursuing a quest in Enchanted Lands I came across the goblins I needed to kill, plus I had just received another to find something at a mill near some goblins. I’d spent some time searching for goblins on the east of the zone and couldn’t find any. All of a sudden I knew where to look since the mill was marked on the map! Bounding over on my dinosaur, leaping over the fields of hostile creatures inbetween, I arrived to see pairs of goblins stood on watch. Hmm, I though, they’re level 35, I’m level 39 – I can take them easily!

And then half the goblin army came running out of the mill and attempted to hunt me down! I actually laughed out loud at that event. I love that EQ2 will occasionally remind you not to be the arrogant adventurer. There are dangers in the world that I cannot yet face despite my triggered self-heals and arsenal of smites and debuffs. It makes a change to have to tread (or leap) carefully in an MMO!